DM17, Manchester’s festival of design and creativity, today announces a “four-track EP of events” on the theme of Fizzing at the Terminals. The four events are a celebratory Buzzcocks gig and a series of exhibitions to mark 40 years since the release of ‘Orgasm Addict’ by Manchester punk legends Buzzcocks, and its iconic record sleeve designed by Malcolm Garrett, then still a student at Manchester School of Art.

The gig and exhibitions are the first events to be announced for Design Manchester’s fifth annual festival, DM17, in partnership with the Co-op, which this year will run from 11-22 October. This year DM17 reflects on the rich musical and visual heritage of the city with an eye on the future. 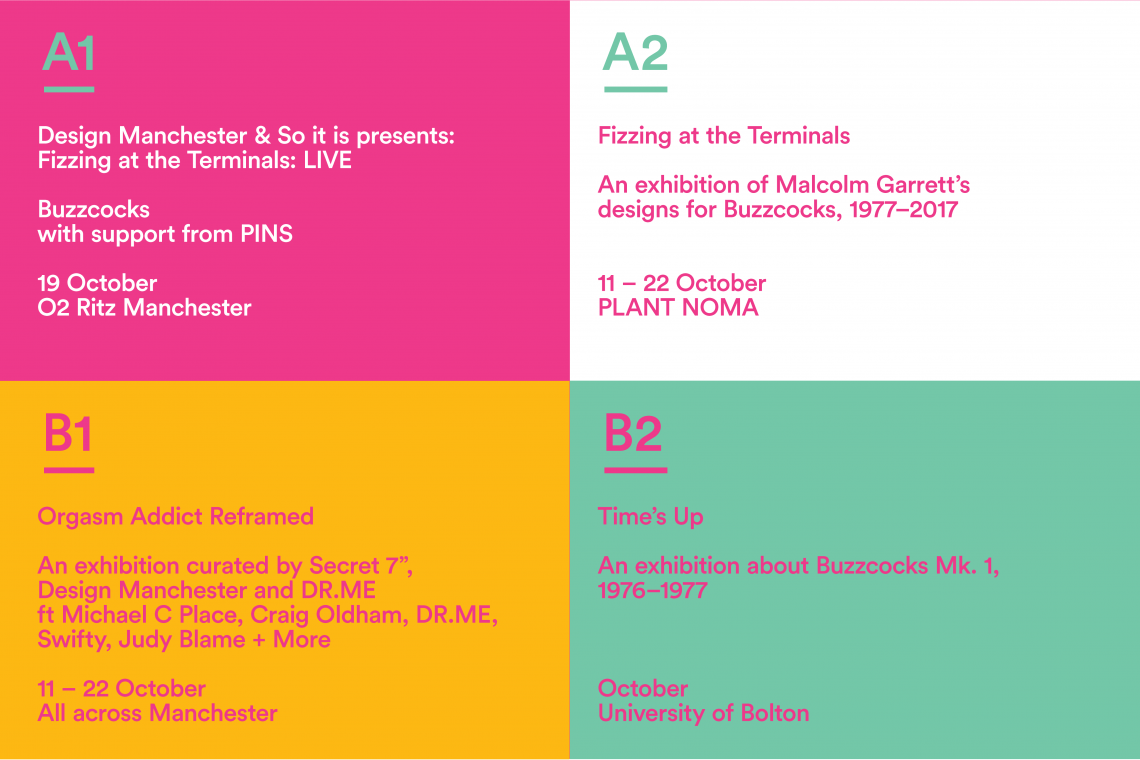 Fizzing at the Terminals: Buzzcocks will play the O2 Manchester Ritz on 19th October, with support from contemporary all-female Manchester punk band PINS (Bella Union). PINS recently collaborated with Iggy Pop on their Bad Thing EP, and in 2015 opened for Sleater-Kinney on the UK leg of their tour. Artwork and projections from the ‘Fizzing at the Terminals’ and ‘Orgasm Addict Reframed’ exhibitions will be displayed around the venue during the gig. Tickets are on sale on Friday at 10am from Skiddle and Ticketmaster. 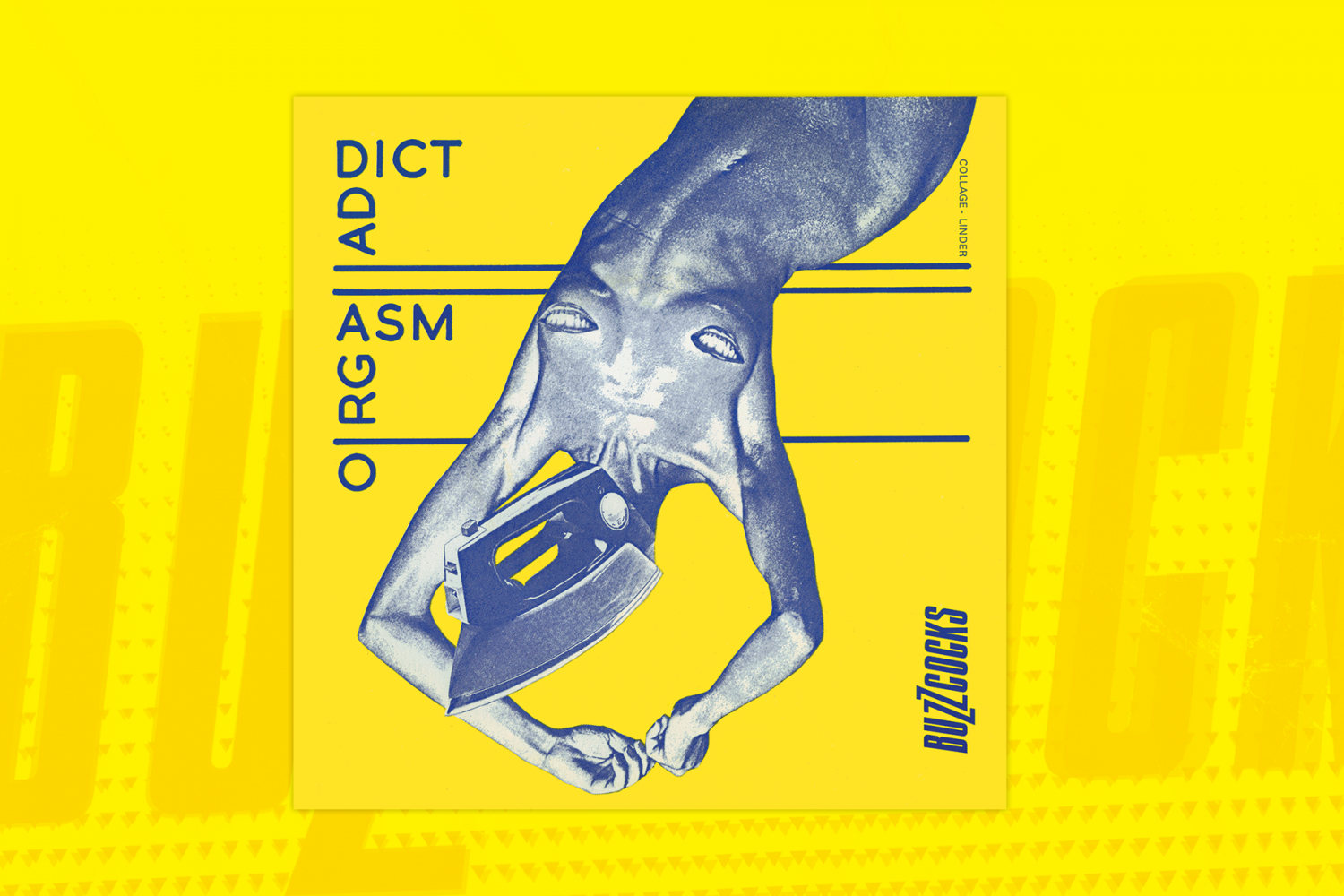 Orgasm Addict Reframed invites friends, leading designers from across the world – including Michael C Place, Craig Oldham, DR.ME, Swifty and Judy Blame – and a new generation of creatives to offer their versions of the controversial ‘Orgasm Addict’ sleeve. The results will be displayed in venues and spaces across the city throughout the festival. Malcolm’s original design featured a montage by the artist Linder Sterling, which Malcolm turned upside down and rendered in single colour to create the graphic impact of the sleeve.

The Fizzing at the Terminals exhibition at PLANT NOMA, the great new workshop space developed after the success of community built pub The Pilcrow at NOMA and in response to a public desire for skill sharing and collaborative city building, presents Malcolm Garrett’s classic designs for Buzzcocks from the early period – including Malcolm’s first ever design for Buzzcocks, the ‘Love Battery’ poster for a gig in May 1977 (featuring the ‘Fizzing at the Teminals’ lyric); the famed ‘Orgasm Addict’ record sleeve that featured in the V&A’s Postmodernism exhibition; the Constructivist-inspired sleeve for ‘A Different Kind of Tension’ – right through to the cover for ‘Buzzcocks, The Complete History’, the updated biography by Tony McGartland published in 2017.

Time’s Up is an exhibition about the first Buzzcocks line-up, with Howard Devoto as lead vocal in 1976 and early 1977. The band were formed in 1976 at Bolton Institute of Technology, now the Universty of Bolton, where the exhibition will be held, displaying artwork and memorabilia including the ‘Spiral Scratch’ EP and the ‘Time’s Up’ box set alongside handbills, posters and photographs.

Malcolm Garrett first worked with Buzzcocks in 1977, whilst he was studying at Manchester Polytechnic (now reverted to its old name of Manchester School of Art), and just before they signed for United Artists. ‘Orgasm Addict’ was his second commission for the band, but by this point he’d already developed a graphic style that was distinct from the punk visual norm.

Malcolm Garrett said: “The message of Buzzcocks in 1977 was empowering and it was timeless. For me, it was also an opportunity to collaborate with others, including the band and other artists such as Linder, and that collaborative approach has remained at the heart of my work ever since. It is exciting to see how these ideas continue to be relevant and influence young creatives today – including in projects like the Pilcrow and PLANT.”

This year’s design festival will feature over 50 events including talks, exhibitions, workshops, films, a design fair and parties at venues throughout the city.